Workflow from the trenches

Workflow is often a best-kept secret within an organisation. This is because it works in the background and utilises tools that people are already familiar with, so most people do not even realise they are making use of these tools.

For workflow tools to be effective, there must be reliable and robust manual processes in place.

Workflow software optimises those processes by tightening up security and increasing productivity quickly and easily.

There are some applications of workflow that are less obvious than others and we have decided to share some of our experiences with you in the hope that these may help you to build even more effective workflows into your business applications.

How workflow blessed the baker

Not too long ago, we were working with a large company who made and distributed bread to large and small vendors. As per the agreement, these vendors would return any bread that was beyond its sell-by date. The expired bread would then be accounted for to be utilised elsewhere and balanced against the Request for Credit from the outlet. 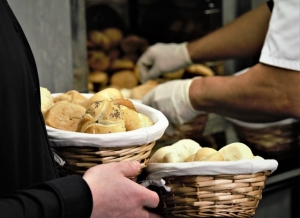 At some point in time it became apparent to management that drivers were returning to the stores with very little damaged or expired stock, however, the figures did not show any related increase. On further investigation, it was established that the manual process was at fault. You see, it was easy for the driver to claim to have ‘lost’ the return advice slip, or to change the written numbers.

The driver was supplementing his income with the expired bread. Each day, the driver would collect the expired stock and stop, at various locations of poorer communities, en route back to the company stores to sell the bread and make a small profit.

On establishing this, it was apparent that the process was in need of attention.

Qualitas consultants stepped in to ensure that return notices could be scanned into the workflow system. This way, the vendor would submit the Request for Credit reflecting the amount of returned stock directly to the baker’s process via email so that the driver no longer had sight or responsibility for return advice notes. On return to the stores, the correct number of loaves were received into stock and any discrepancies had to be explained by the driver on the spot.

This simple change was quick and easy to implement and had far-reaching benefits for the organisation.

Stay tuned for more stories from the trenches, and if you have some stories of your own, please share in the comments below.

Want to join the discussion?
Feel free to contribute!

The History of ERP

Electronic document management and the paperless office
Scroll to top

This site uses cookies. By continuing to browse the site, you are agreeing to our use of cookies.

We may request cookies to be set on your device. We use cookies to let us know when you visit our websites, how you interact with us, to enrich your user experience, and to customize your relationship with our website.

Click on the different category headings to find out more. You can also change some of your preferences. Note that blocking some types of cookies may impact your experience on our websites and the services we are able to offer.

These cookies are strictly necessary to provide you with services available through our website and to use some of its features.

Because these cookies are strictly necessary to deliver the website, refusing them will have impact how our site functions. You always can block or delete cookies by changing your browser settings and force blocking all cookies on this website. But this will always prompt you to accept/refuse cookies when revisiting our site.

We fully respect if you want to refuse cookies but to avoid asking you again and again kindly allow us to store a cookie for that. You are free to opt out any time or opt in for other cookies to get a better experience. If you refuse cookies we will remove all set cookies in our domain.

We provide you with a list of stored cookies on your computer in our domain so you can check what we stored. Due to security reasons we are not able to show or modify cookies from other domains. You can check these in your browser security settings.

These cookies collect information that is used either in aggregate form to help us understand how our website is being used or how effective our marketing campaigns are, or to help us customize our website and application for you in order to enhance your experience.

If you do not want that we track your visit to our site you can disable tracking in your browser here:

We also use different external services like Google Webfonts, Google Maps, and external Video providers. Since these providers may collect personal data like your IP address we allow you to block them here. Please be aware that this might heavily reduce the functionality and appearance of our site. Changes will take effect once you reload the page.

The following cookies are also needed - You can choose if you want to allow them:

In the challenging time we are currently facing we continue to monitor developments surrounding the COVID-19 virus and want to assure you that our top priority is the safety of our employees and customers.

As far as possible we are continuing with business as usual.

As always, our staff have been instructed to be particularly mindful of hygienic habits and to make use of sanitizers when visiting sites, and also to respect the recommended personal contact space.

Our consultants are working from their home- offices and will be contactable as usual for any assistance you may require, a great deal of which can be resolved on-line or by telephone so they can avoid site visits unless critical.

We are continuing to keep the situation under constant review and any changes to our consulting schedules will be communicated to you should they occur.